A Short History of Sailors' Valentines

According to folklore, Sailors' Valentines had their origins with homesick sailors creating designs as love tokens for their sweethearts at home.  Set in octagonal mahogany boxes used for navigational equipment, these intricate designs were created with colorful tropical seashells collected from various ports of call around the globe. Small shells were used to spell out sentimental messages like “I love you” or “Thinking of You” bordered by a unique and personal design.

The sailor tost in stormy seas,
Though fir his bark may roam,
Still hears a voice in every breeze
That wakens thoughts of home.
He thinks upon his distant friends,
His wife, his humble cot,
And from his inmost heart ascends
the prayer-Forget me not.

The romantic verse above was taken from a Victorian era Valentine’s card. Most valentines would include an illustration depicting the departure or return of the sailor to their sweethearts and wives. 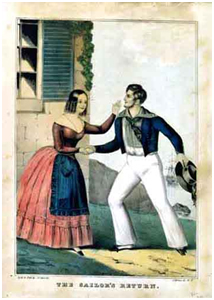 Seashell collecting became popular by the early 1800s, especially in England and America. By the mid-1800s, sea shells were brought back from the Caribbean to Europe and America for use in home display cases. This interest in shell collecting may have later inspired the idea of the Sailors' Valentine, and the intricate shell display cases influenced the busy designs of these affordable souvenirs of sea voyages.

As sailors traveled around the world, they often made or purchased mementos of their travels for their loved ones back home. As stated in Marine Art & Antiques Jack Tar, A Sailor’s Life 1750-1910 by J Welles and Rodney P. Carlisle, “the sailor was concerned with making a fine appearance once he returned to shore, and hence would embellish his shore-going finery. He never stopped thinking about women and the love-life he was missing, representing his fantasy by buying a gift he would later lavish on a particular woman.”

Such as the fancy-work sailors' valentines from the island of Barbados.

Several facts point to the West Indies, and particularly Barbados, as an origin for Sailors' Valentines. Barbados, was one of the earliest English colonies and enjoyed close ties with England and America dating back to as early as the 1600's. Barbados, the easternmost of the British West Indies was an important port of call for ships engaged in trade among the islands. The most windward of the Caribbean islands, Barbados was visited by merchant seamen, whalemen, and yachtsmen alike, who arrived for a variety of reasons, including trading, reprovisioning, and touring the island. Visitors bought tangible reminders of Barbados home with them. 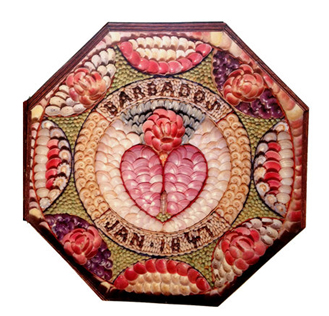 Research indicates that “Sailors' Valentines” were made by local craft women in Barbados around the 1750’s.  Shell art and fancy work became a dedicated past time for the Colonial ladies living in the West Indies and in 1878, B. H. (Benjamin Hinds) Belgrave opened his New Curiosity Shop featuring “Marine Specimens and Native Manufactures in Fancy Work”. Located in Bridgetown, Barbados, this proprietor was the primary source for Sailors' Valentines.  In 1895 his brother G. G (George Gordon) Belgrave took over and operated the business until his passing in 1925. 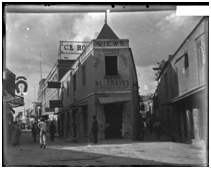 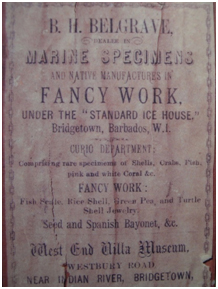 Traditional Sailors' Valentines were usually double-sided octagonal wooden boxes, hinged together and made in either of two sizes: 9/12 inches or 12 – 14 inches. Each side was covered with protective glass and often closed with a heart-shaped lock or clasp.  The designs were created by gluing tiny shells in symmetrical patterns to a cotton backing; they typically included flowers, hearts and sentimental messages.  Sometimes a blank area would be left in the center of the design for adding a special photo.

Sailors' Valentines offer a unique glimpse of love and romance from a historic time period.  Today, many fine antique sailors' valentines can be seen in museums and private collections that hark back to an era of romance.

Contemporary Sailors' Valentines
A handful of artists still produce these marvelous fancy works. Today, there is a much broader scope of designs than those of their Victorian counterparts. Sailors' Valentine artists today create everything from replica valentines closely resembling the 19th century designs to completely original and very elaborate and unique creations.